This years’ World Book Night event at Gimnazija Vič was the culmination of the international grammar school haiku competition, and the micro-story grammar and primary school competition. The students of Gimnazija Vič took great effort to present an outstanding cultural event, at which they made sure to introduce the international public with all the Slovenia’s natural beauties, national cuisine  and cultural achievements.

Our students also took part with their stories and I am very proud to announce that Lorena Vovk and Matej Berlot managed to capture the judges’ attention with their intriguing plots. Their winning stories can be read in the Gimnazija Vič World Book Night collection of the winning stories.

The students of our school, however, will be able to read all the competing stories and I am absolutely sure you will like them all. 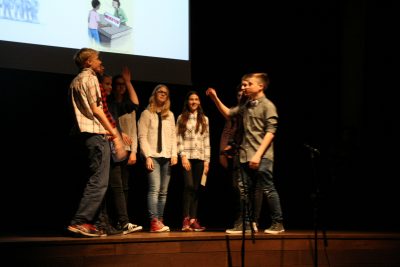 And now let us proceed with the most astonishing point of our World Book Night event participation, with which we wanted to make a statement about all the cruelty and idiosyncrasies affecting people’s lives throughout the world, when all that really matters is sadly being left aside. Marcel, Lorena, Tinkara, Sara, Sabina, Vito, Vida and Filip read the news which overflow us every day about racism, natural disasters, capitalistic and materialistic devastating greed, etc. and then Maja, with her astonishing and unforgettable voice and lyrics reminded the public of all the things that really matter in life. Actually, I cannot find the words which would justly describe the atmosphere these children created in Gimnazija Vič hall on Friday, 31. 3. 2017.

We will present all the competing stories as well as the script, including Maja’s lyrics and Filip’s power point illustrating all the issues highlighted in our act.

Hopefully, you will be able to watch our performance on one of our school’s next celebrations.

In the end, I would like to express my gratitude for the genuine enthusiasm, eagerness and empathy my team of students had exhibited throughout the creativity process. Guys, you are the best!

The Curse of a Wolf (Autumn Moonlight)

Gosh, we are such a pathetic group of typical teenagers! Tonight full moon is about to shine over the sky, so, inspired by the tacky old horrors, Anna, Jimmy, Tod and I sneaked out of our bedrooms and headed for the woods nearby where several youngsters supposed to have been killed.

Anyway, now we are here, surrounded by the claws of the dark night and thick branches of monstrous trees, burning marshmallows over a small fire. Bored, I decide to stray away and shortly, I reach a wide shiny path, which is probably just a reflection of the full moon. As I step on the path, I see different images on it and when I am about to take a peek at my reflexion, I’m stunned… Where is it? Where am I? O God, there’s a wolf nearby! I can see its reflexion on the path! Run! The image of the wolf follows me! I’m terrified, but strangely, all that I can think of is food. I’m guided by the scent of fresh meat and suddenly I’m back with my friends.

“A wolf, run!” scream Anna, Jimmy and Tod as I approach. I realise I’m the wolf and they are my pray.

The Existance of a New Mankind (Don’t imitate me)

A normal morning. I enjoy early mornings when the tender soothing embrace of the departing night opens my eyes.

Almost instantly, however, I am faced with the pointless choking routines and demands of life. Gosh, how messy my room is! How can I live in it? Why is it necessary to practice classical music on this boring guitar? Are people mad? Who wants to read so many books? Why is there no TV? I demand computer and Wi-Fi! When will lunch be ready? How far do we have to go? Are you mad? Outside you can catch flu. I’m coughing. I think I’m ill.

I think somebody is shaking me. I shout “No,” as I try to hide myself into the safety of the idleness and freedom of the night.

It’s half past eight. A normal morning…..

Everybody knows that from time to time a tragedy happens. A tragedy that affects the whole world, like an earthquake or a massacre. But family tragedies happen every day.

Once there was a woman. Her name was Lucky Braveheart. Her name completely fitted her caracter. She was happy, strong, brave and her life was one of the luckiest. She had many friends and a wonderful husband who adored his morning tea ritual. But then all of a sudden, Lucky’s husband died in a car accident. At first Lucky didn’t appear as a bereaved wife; she was always very proud. But slowly days turned sour for Lucky Braveheart. She turned to solitude and silence.  Her friends tried to help her, but she wouldn’t talk to them. Soon her name became an irony. She got rid of all her husband’s possession. The only thing that remained was the morning tea.

As years passed by, her husband’s face and voice started haunting Lucky every morning trying to get her back to life. She tried ignoring it all, but the voice was persistent, until one day, she stepped out of the house. Observing the people in the street, Lucky said to herself:«Would my husband want to see me like this? Morning tea is not the only thing he left behind. I must live and charish the memory of all the precious moments we had spent together.«

And that marked Lucky’s rebirth.

We don’t know what happened to her, but we can hope she succeded in life.

There once was a sailor who, like most of his kind, enjoyed sailing across the endless oceans. One day he was caught by the stillness of the sky, preventing him to move anywhere. He didn’t bother with it, but then he heard a loud noise coming from the ocean, and it caught his attention. He was confronted with a pair of gigantic yellow eyes, approaching him slowly but inevitably. For a moment he panicked, but then he just closed his eyes and never opened them again.

Life and Death (Don’t imitate me)

Roy was desperately trying to prevent the worst. He screamed, “Carmen, don’t do that!” He was too late, however. Carmen jumped into the river and soon she was trapped into its uncompromising currents. Roy, bereft of hope to see his beloved again, found himself lost in a dark tunnel. As he was just about to take a step further into the darkness, Carmen’s words awoke him, ”Don’t imitate me!” He stopped for a moment, trying to recapture his belief in life, death, however, seemed a much better solution ….